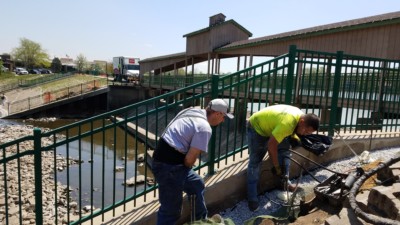 The Lake George Dam in Hobart Indiana had voids that developed behind its sheet pile walls along the main spillway and auxiliary due to overtopping that occurred in 2017. An engineering study revealed that voids occurred along 4 of its sheet pile walls. It was determined the soil loss was caused by overtopping and potentially open joints at the interface of the sheet pile and concrete abutments, which was due to original construction methods.

The rehabilitation design was to inject a high-density two-part expansive polyurethane along the backside of the sheet pile walls with multiple goals being accomplished with a single application. The first goal was to fill voids and stabilize along the sheet pile walls. The second goal was to lift the tethered block surface back to grade in order to meet dam inspection requirements. This process included stabilizing and compacting the weakened soils and then building upon the soil-polyurethane matrix and providing upward lift using proprietary injection patterns. The final goal was to seal the concrete-to-sheet-pile interface at all four locations from the surface and without excavation.

The work was completed in 2 days, on time and on budget. All areas were stabilized and all the known voids were filled. The joints were sealed along the sheet pile and concrete interfaces, thereby preventing soil washout from occurring if the dam experiences overtopping in the future.