Specifically, as a result of this storm, the Jackson Lakes box culvert in Pensacola suffered a tremendous amount of settlement and had an embankment failure that caused water to flow underneath the south end of the culvert, jeopardizing the culvert’s long-term structural viability. This 1,675-sq ft quadruple barrel box culvert, located just a few miles from the Gulf of Mexico, is part of an overall flood and drainage system that helps protect the surrounding residential community from lake overflows and also to divert waters from entering a pristine lake to the north end of the culvert.

Escambia County was left searching for an innovative solution to deal with the settlement issues, which were as large as 2 ft in several locations throughout the culvert. A preliminary damage assessment was then performed by Jehle-Halstead Inc. in June 2014, in which the company found that, “The local market has recently been exposed to a geopolymer soil stabilization and lifting technology. The technology is said to provide a means of structural lifting, foundation subsidence correction and void filling. It would be prudent to explore this technology as a possible alternative to complete replacement of the concrete culvert.”

Then, in November 2014, Ground Works Solutions Inc. (GWS) was asked to develop a preliminary estimate for its URETEK polymer injection process by the county, as part of its overall budgetary discussions with FEMA. The County also vetted many other alternatives for rehabilitating the structure, including the possibility that they may be forced to replace the culvert altogether.

Once this budgetary process was completed, the project went out for competitive bid in July 2015. The scope of work for the bid not only included void filling, undersealing, and re-aligning the box culvert, but also to re-secure the top of the box culvert and return the surrounding areas to grade. GWS was selected as the winning bidder, and given a notice to proceed on Oct. 1, 2015. Other members on GWS’s team for this project included Holland Pump Co. (assisting with dewatering) and H2O Environmental Services LLC (masonry repairs).

The GWS team onsite had designed a multi-application solution, whereby both URETEK Method and the patented URETEK Deep Injection Process (UDI) would be used to fill the voids and lift the culvert. 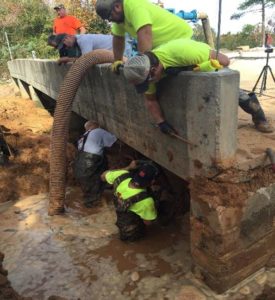 Two GWS crews mobilized to the site to begin operations on Dec. 1, 2015. Some of the pertinent site specific conditions that helped shape the approach to the rehabilitation included:

Dewatering was an issue initially onsite, and a temporary damn was constructed utilizing an excavator along with a dewatering pump that remained onsite throughout the duration of the project, to keep further infiltration from breaching into the culvert while the crews were onsite. Next, several exploratory holes (5/8 in.) were drilled through the base and surrounding the culvert down to -5 ft to get a real time field assessment of the voids in the soil.

The GWS team onsite (led by Angel Granados and Andy Emfinger) had designed a multi-application solution, whereby both URETEK Method and the patented URETEK Deep Injection Process (UDI) would be used to fill the voids and lift the culvert. The use of a lifting bag was also originally scoped, but was not ultimately utilized on this project, due to the saturation of the soils under and around the culvert.

The URETEK Method is a process whereby URETEK polymers are injected directly underneath the structure for the purposes of undersealing and void filling. The UDI process is different in that the injections occur deeper into the soil on both a vertical and horizontal pattern, allowing for soil densification and providing the vertical lift and soil stability that is required for the project.

Once onsite, the specific scope for Jackson Lakes was that a two-part, expansive polyurethane (URETEK polymers) would be injected around the perimeter of the culvert first (UDI), to form a containment wall for the material and also realigning and lifting the culvert back into place, and then the void filling and undersealing would occur (Method) by injecting directly through the slab to densify the soils supporting the base of the culvert.

It’s important to note that the polyurethane material used displaces any water that may be present in the soils, to drive existing water away from the structure and to prevent water from running under the culvert and further compromising the soils in the future. Finally, all of the holes that were drilled through the base of the culvert would be epoxied in place, and then the remaining masonry work and regrading of the site could occur.

In addition to the dewatering complications, a couple factors made this trenchless culvert repair project very challenging from a technical standpoint. First, the large amount of lift needed (2 ft) to a structure that has as much mass as a quadruple barrel box culvert required a very precise execution of the aforementioned plan, also to ensure the soils were stabilized in a manner that would not cause any polyurethane material run off. Second, was that due to the design of the culvert, saturated soil conditions and high water table, GWS crews had to lift the box culvert uniformly. Both of these issues were overcome through the use of multiple rigs, injection guns and pumps, and injecting the material simultaneously, which took a great deal of coordination, to achieve the uniform lift. 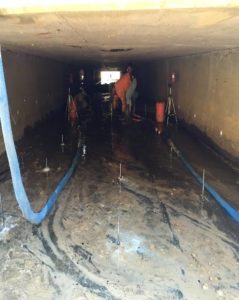 In total, 38,773 lbs of URETEK polymers were used to lift the structure 2 ft and restore the long-term viability of the Jackson Lakes box culvert. It was completed in six days, which is a fraction of the time of other potential solutions and was done for 25 percent of the cost of rip and replace.

Ground Works was featured in Trenchless Technology Magazine’s July Edition for this project. You can read the full article by clicking this link