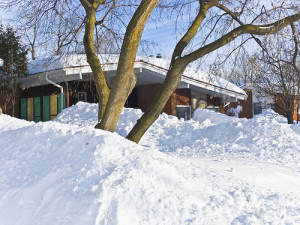 The winter of 2015 will go down in the history books as one of the snowiest. In fact, as of March 15, 2015, Boston had accumulated a total of 108.6 inches of snow.  This was the most amount of snowfall since the city started tracking weather back in 1872.  It has also been a brutally cold winter across the entire Northeast.  Once again, Boston broke records, averaging only 16.1 degrees in February.

After a long season of shoveling, snow blowing and digging out the car in order to go anywhere, warmer weather is a welcome signal that spring is almost here.  Experts predict that this spring’s runoff from melting snow and ice will be the worst we’ve had in the last 15 years. Unfortunately, melting snow and ice can cause damage to houses and other buildings and may uncover some unwelcome cracks in the foundation.  As a structure ages and seasons change, small foundation cracks are common, but when the ice and snow melts after a brutal winter like the one we just had, much larger and more dangerous settlement issues may occur, including flooding inside the building.

There is a ten percent ratio between snow and water.  So, for 100 inches of accumulated snow, it means 10 inches of water will need to find a way to run off.  If snow is left on the roof or around the foundation of your house, the water runoff resulting from the melting snow can cause soil erosion around your home.  It is better to be safe than sorry, so moving the snow even three to five feet away from your house will reduce problems caused by snow melt as long as it is moved to a well drained area that slopes away from the structure. 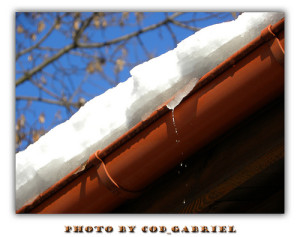 Homeowners should also remove snow and ice from gutters using sodium chloride to make sure they are working properly. Down spouts should be routed at least 20 to 30 feet away from the house to a well drained area.  This will prevent water runoff from invading any of the cracks that have formed in the foundation.

The basement is most at risk from flooding due to snow melt.  Water will find its way into cracks in the walls, floors and windows.  The most common place where water finds its way into the basement is where the floor meets the wall.  You should have a sump pump on hand to make sure that you can drain the water from your home right away.  If not, more serious problems like mold can occur.

It is also a good idea to determine what is causing the cracks in your foundation to prevent the potential of permanent, long-term damage to your home.  This is where URETEK Holdings can help.  The URETEK™ Deep Injection Process is a solution for repairing soil erosion and stabilizing the soils around foundations to prevent cracks from getting any worse.  The chemical polymer can also be used to seal cracks around the foundation, preventing water from entering the home between the floors and walls.

All of these tips and solutions will help keep your home dry and cozy the next time Mother Nature decides to dump several feet of snow on your home.