URETEK Holdings is Featured on the Cover of the Florida Specifier

The system uses a hydro-insensitive two-part polymer that is injected in a highly controlled manner through 1/2-inch diameter steel injection rods. After initially hydrolancing (water jetting) to clear utilities to five feet below land surface, the injection rods were installed at 5 discreet elevations in a 3-foot horizontal and vertical grid pattern. The STAR486 material was then injected through each rod, which expanded to at least 15 times its initial liquid volume, forming a sphere at each discreet injection interval that bonds to the previously injected material adjacent to it, thereby forming the subsurface containment wall. 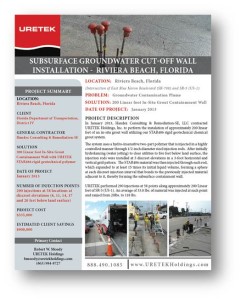